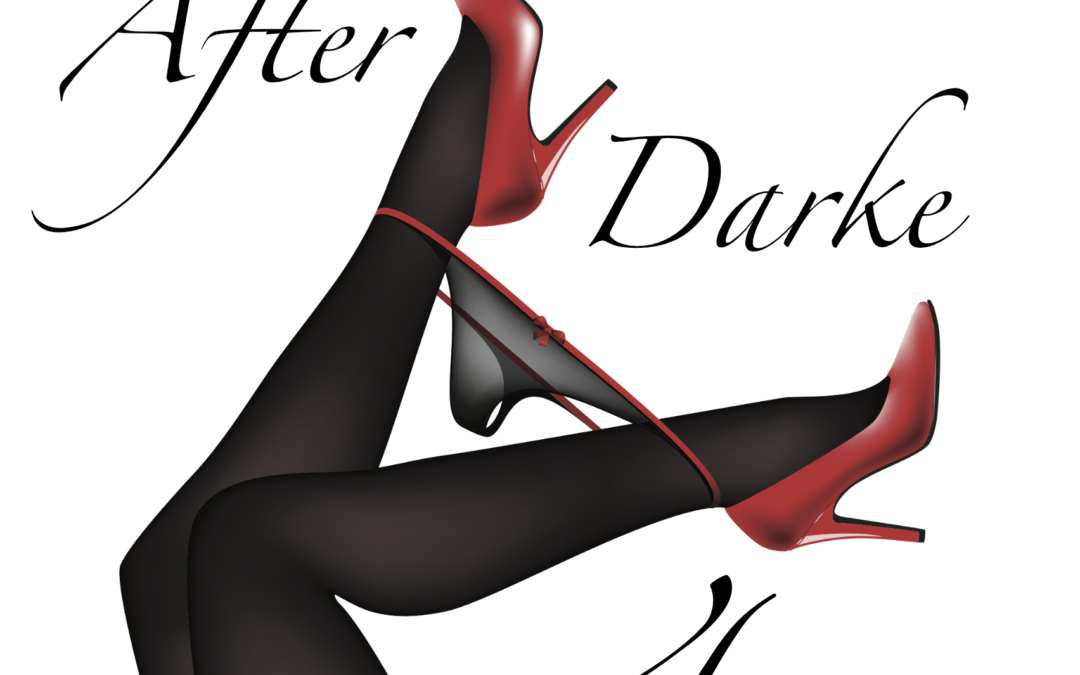 “Well, a deal’s a deal.” I muttered under my breath.  I checked my reflection in the mirrored wall of the elevator as I rode it up to the executive floor of Lyghte Technologies, Inc. It’s where Grant insisted I meet Jennifer. I was to pretend I was working as a contracted business consultant and liaison between Lyght Technologies and Estron Tech. Apparently Lyghte Tech was in the process of a takeover, but wanted to make sure that all the employees were well taken care of and their transition as seamless as possible. That’s where I apparently came in.

Grant told me I didn’t need the details. I argued with him for what seemed like hours, but I knew that I would do it regardless. I owed him, after all. I just wish it wasn’t right in the beginning stages of my baby, my club, After Darke.

I needed to get into a play room that night, but I just had no idea with whom. I had a stack of possible matches for myself, but the boring thing about being the owner was that I knew everyone behind the mask. There was a certain thrill when you didn’t know who was behind it. Sometimes, knowing who was behind it made it harder to feel free. I shook my head slightly to wipe away thoughts of playrooms, secret masters, and sexual thrills because I was about to knock on my unsuspecting client’s office door.

A soft but commanding, “come in” filtered through the frosted glass door.

I was not expecting to find a beautiful, raven haired woman awaiting me when I entered Jennifer McCall’s office. To be honest, I wasn’t sure what I was expecting. But again, Grant was tightlipped about any details. Just because I understood his reasoning, didn’t mean I had to like it.

“Hi, I’m Rachel Cutler, the new consultant.” I walked into her office with a smile on my face and my hand outstretched. Grant told me that I would have to show her that I could do the job and it would take awhile to break through the armor she kept up at all times. But, he said patience and persistence would get me into her good graces.

Jennifer was stirring her coffee near the window to my right, staring out at the New York City skyline, awash in mid-morning sunshine which glistened off the Hudson River like a sea of diamonds in the distance. Big puffy clouds sailed past and I felt like I was up in a high tower, meeting my princess. She smiled warmly at me even though she seemed a bit startled by my friendly personality.

“Hi, yes, come in, come in. Mr. Lyghte, Sr. mentioned you’d be coming in this morning.” Her voice was husky and sent a shiver up my spine. Now, I am a straight woman, who loves the D. But, I can most definitely appreciate a sexy woman and my bi-curious nature was on high alert within a matter of moments of meeting this particular one.

It made it easy to accept my fate and I walked into the office, and let the door whoosh closed behind me.

Jennifer’s demure, knee length, black pencil skirt and soft pink blouse did nothing to hide her voluptuous body underneath. She was curvy and juicy in all the ways a woman could admire another woman. I could barely keep my eyes off her larger than average breasts, but I knew it was rude to stare so I averted them quickly.

A woman in my line of work didn’t miss the way her eyes lit with appreciation when I crossed my legs as I sat down, my own slitted skirt showing off a tasteful bit of leg. I stifled a smug smile and settled for a small, polite one instead.

“Shall we begin? Once we get all the business out of the way, then we can plot how we’re going to take over before the men arrive.” I teased her, seeing if she would bite. A gay woman in a man’s world, who looked like Jennifer did, probably had even more to prove.

My instincts were spot on and she threw her head back and let out a throaty laugh. I laughed with her and eyed her swan-like neck. It was perfect. I wanted to bite it.

Jennifer’s eyes twinkled as she sipped her coffee before placing it on a coaster on the glass-top desk.

“I like you already.” She admitted, leaning back in hear office chair and folding her hands on her lap.

“Well, then I like you, too.” I said softly, showing her a bit of vulnerability in my eyes for a brief moment. It’s okay, you can trust me, it said.

She seemed startled by what she saw, but then the curiosity kicked in and she leaned forward slightly.

“Then we’re going to get along just fine.” She murmured. She sucked her bottom lip between her teeth and bit down gently.

“Perfect. How about we grab a drink this evening and talk about how well we’re going to get along?” I was bold with that statement, but Grant told me to be bold and confident. Jennifer liked that.

Her nostrils flared slightly with the deep breath she took. The dark pools of her pupils dilated, overtaking her green irises.

“I think that’s a great idea.” Her voice was breathy and when our eyes locked I knew I was in. I smiled my signature smile, reigning her in even further and we got to work.

I couldn’t stop checking my phone all day. It was eight o’clock and I was still in my office staring at the damn black screen. Not one text or call from Scarlet to tell me everything was going smoothly. I told her I needed updates throughout the day. This woman was going to be the end of me. Again.

My secretary, Alicia poked her head into my office and I didn’t miss the way her big brown eyes stared longingly at me. If I was honest, I wanted to fuck her brains out the minute I hired her but my father saw me ogling her and told me if I fucked one more employee, he’d demote me. I knew he’d hold me accountable and follow through. I sure as hell didn’t need that kind of embarrassment.

When I had all these tight bodies flaunting themselves around me all day, giving me their big “fuck me” eyes and dropping pencils so they could bend over in front of me to pick them up just to give me a view of what I was missing that they were freely offering, it got really hard to say no.

I had to admit that as much as I enjoyed a good hard fuck with each of my past secretaries splayed out on my desk, I never felt fully satisfied. Something was missing and, no, I wasn’t talking about love. Fuck love. Love was just a way to try and tie a man down to just one woman. Fuck that shit.

Now, give me a pussy that out-pussies all the other pussies in the world? Hell yeah, I’ll stick with that one. I just hadn’t found it yet.

Alicia was about to speak when my phone lit up with her name. I waved Alicia away and snatched it up once the door was firmly shut.

“What the fuck took you so long?” I barked into the phone.

“Well, hello to you, too.” Her voice purred into my ear and dammit all to hell, my dick grew hard, straining against my slacks. I curled my hand into a fist and I tried to take a calming breath.

“I didn’t come to collect on your debt to be nice to you, Scarlet. Remember, I could kill you instead of having you scissor fuck my client.” Damn. Now I had images of Scarlet rolling around naked in bed with Jennifer, another woman I couldn’t touch for entirely different reasons.

“Touché.” she replied. I could hear sounds of the city in the background, voices chattering, horns honking. Her breath came out in little puffs in my ear while she walked the bustling streets of Manhattan. I adjusted my dick and the pressure of my own hand was almost too much. There had to be something wrong with me. I hated this woman and everything she stood for, everything she did…and here I am, practically blowing my load under my desk just listening to her talk.

“What have you got so far?” I heard a door close on the other end of the phone and the ambient noise stopped. It was just Scarlet’s steady breathing within the loud silence.

I pressed a button on the underside of my desk which locked my office door. I didn’t need anyone walking in on me while I pulled on my own flesh.

Scarlet launched into a play by play of her day and as soon as my dick was in my hands, I stifled a sigh. I thought of her under my desk, her red lips wrapped around me, her hair grazing my thighs as she bobbed up and down.

I coughed to disguise my groan of pleasure and then grabbed a tissue to clean myself up.

I felt like a damn teenager jacking off to phone sex with his first girlfriend.

“Grant? You there? You alright?”

I cleared my throat.

“Yeah, yeah I’m ok. Water went down the wrong pipe.” I rasped out, struggling with the tissue, which was now leaving little white balls of fuzz all over the fabric of my pants. I gritted my teeth in frustration.

“Ahh. Okay. Well, if you’re satisfied, can I go now? Or do I need to listen to you while you jerk off again?”

I rolled my eyes. I was busted. I could hear the laughter in her voice and it pissed me right the fuck off.

“I’m sure you enjoyed it, seeing as you are my hired whore.” I winced at the harshness of my words, but brushed it off. This was just business.

“Oh, yes, sir. I enjoyed it very much.” Her voice was sultry, but I knew the difference between her voice when it was dripping with genuine desire and her robotic sex voice. She was play acting. For me.

It kind of turned me on even more, the bastard that I am. Then, I had an idea.

Our little agreement was about to be a whole lot more fun…for me.